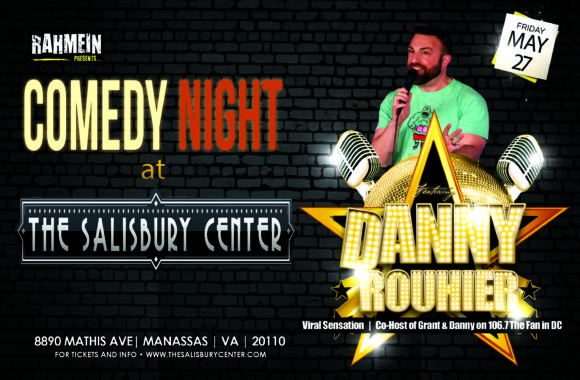 Danny Rouhier, co-star of Washington, DC based “The Grant and Danny Show” on 106.7 The Fan brings his personal and funny takes on everyday life and an arsenal of impersonations to The Salisbury Center in Manassas, VA on Friday, May 27, 2022. Danny is returning after being featured at The Salisbury Center last year right after he went viral for his impersonations of Charles Barkley and Shaq talking to Charles Barkley and Shaq. He packed the house that night an plans to pack the house again this time. Come check him out and get your tickets now while you can.  Click here on image to purchase tickets.

More about Danny from his website…Many years ago, Danny Rouhier was born. Sometime later, he became the greatest entertainer ever to live (bio written from future). While you’re reading this, he’s a talk radio host and standup comic in Washington, DC. You can catch his radio show mid-days on 106.7 The Fan where he tackles sports and pop culture with an incredible breadth of knowledge, awkwardness, humor, and a staggering amount of dorkiness. A hopeless DC sports fan, Danny got recognition for producing weekly videos about the Washington Redskins that garnered over 300,000 views, features in the Washington Post and SI.com’s Hot Clicks. He was also a Nintendo Power Player. Unrelated, but no less important. As a standup comic, Danny is fast-paced, clever, and self-deprecating with dozens of voices and characters. He is also super humble and doesn’t like to talk about it much. He’s performed all over North America at clubs like Caroline’s on Broadway, The DC Improv, Funnybone comedy clubs and at festivals in Boston, DC, Detroit, Seattle and a bunch more stuff that’s totally impressive. Danny was also the studio comic for the Tyra Banks Show. Seriously. That was a thing. Danny has shared the stage with industry giants Bill Burr, Jim Norton, Dave Atell, Jim Gaffigan, Bob Saget, Todd Barry, Reggie Watts, Tom Green, and more famous people. In March of 2012, Danny record his first full length CD: Tell Joke For Super Great Success. It’s really good.

We use cookies on our website to give you the most relevant experience by remembering your preferences and repeat visits. By clicking “Accept All”, you consent to the use of ALL the cookies. However, you may visit "Cookie Settings" to provide a controlled consent.
Cookie SettingsAccept All
Manage consent

This website uses cookies to improve your experience while you navigate through the website. Out of these, the cookies that are categorized as necessary are stored on your browser as they are essential for the working of basic functionalities of the website. We also use third-party cookies that help us analyze and understand how you use this website. These cookies will be stored in your browser only with your consent. You also have the option to opt-out of these cookies. But opting out of some of these cookies may affect your browsing experience.
Necessary Always Enabled
Necessary cookies are absolutely essential for the website to function properly. These cookies ensure basic functionalities and security features of the website, anonymously.
Functional
Functional cookies help to perform certain functionalities like sharing the content of the website on social media platforms, collect feedbacks, and other third-party features.
Performance
Performance cookies are used to understand and analyze the key performance indexes of the website which helps in delivering a better user experience for the visitors.
Analytics
Analytical cookies are used to understand how visitors interact with the website. These cookies help provide information on metrics the number of visitors, bounce rate, traffic source, etc.
Advertisement
Advertisement cookies are used to provide visitors with relevant ads and marketing campaigns. These cookies track visitors across websites and collect information to provide customized ads.
Others
Other uncategorized cookies are those that are being analyzed and have not been classified into a category as yet.
SAVE & ACCEPT